Founded in 2002, the Astrum Sophia is a fully contacted initiatory Order dedicated to continuing and fostering the Ogdoadic Tradition of the Western Mysteries, and thus providing a vehicle for the advancement of its members in an ambience of living alchemy.  It is a private esoteric society and is not affiliated to any other organization, whether esoteric, religious or political.

The Order is committed to the ideal of the magical family and its unwavering devotion to raise its initiates to true Adepthood within the regenerative mysteries of the Ogdoadic Tradition.  It is a Hermetic and magical Order, based on 19th-20th century Aurum Solis materials and on evolving esoteric thought.

Ordo Astrum Sophiae derives its Charter of Succession and initiatory lineage from the Aurum Solis, Order of the Sacred Word, founded in London in 1897 by George Stanton (pictured right) and Charles Kingold. As a chartered and contacted Order, by authority of the Grand Master, it is empowered to transmit the First, Second and Third Hall initiations and to revise or authorize new rites that function within the contexts of our Tradition.

Membership in the Order, without exception, must proceed through the traditional grade structure.

The governing body of the Astrum Sophia is the Collegium Cathedrarum, or College of Thrones.  This triad is composed of the Grand Master, the Prior and the Administrator-General. These officers are servants of the Order and work for and on behalf of the spiritual ideals of the Order and its Companions. They operate as members of the Grand Commandery of the Winged Serpent.

Affiliated bodies within the Astrum Sophia include Commanderies and Citadels. A Commandery has the autonomy to administer its own affairs, select its own members, elect officers, establish Citadels and set its own curriculum, although it must operate within the principles of the Astrum Sophia and the Ogdoadic Tradition.  It is empowered to transmit the first two grades of the Order; initiation to the Third Hall requires permission from the College of Thrones. The College of Thrones must have a current list of all members and their grades and will, as much as possible, maintain communication with all members.

The Master of a Commandery must have attained to the Third Hall, that is, must be a member of the Stella Gloriosa.  As well as a Master, every Commandery should have (whenever possible) a Preceptor and an Administrator, thus being governed by a triad corresponding to the College of Thrones. A Commandery requires its own Temenos in order to perform initiations.

A Citadel is a working group established by a Commandery, operating under the authority of that Commandery and its Master. Members of a Citadel are also members of the sponsoring Commandery. A Citadel must have at least one First Hall initiate. It is not authorized to perform initiations or to have a consecrated Temenos. It is, however, encouraged and supported in the process of attracting new members, meeting as a group, and working towards becoming a Commandery. A Citadel must have permission of the College of Thrones before becoming a Commandery.

The term “House” refers to the initiatory structure and function of an Astrum Sophia group. Every Commandery is also a House, because it has authorization to consecrate a Temenos and perform initiations. On occasion, the College of Thrones will give a Citadel the status of a House, although it still remains under the direction of the Grand Commandery.

The Astrum Sophia is a non-commercial magical Order.

No individual shall make any profit by virtue of  being a member or leader of Astrum Sophia.

The Order does not charge dues or fees for membership. Commanderies or Citadels may exact modest dues on a local level if deemed appropriate. Since initiations and advancements are spiritual gifts of the Order, no fees shall be charged for performing these rites.

Members of a Commandery shall have access to all financial records.

Membership in Ordo Astrum Sophiae is by invitation only, either spontaneously extended or arising from an application.  Upon acceptance, an applicant becomes a Probationer, and begins a process of qualifying for initiation.  A Probationer becomes a Member upon receiving the Rite of Induction, the First Hall initiation.

Applications for membership may be refused without explanation, though considerations of race, creed or sexual orientation will not constitute a barrier. No person under the age of 21 years is eligible for initiation into the Order.

The title of Associate Member can be given to any friend of the Order without initiation at the discretion of the Master of a Commandery. This title carries no rights: it is simply an acknowledgement of a fraternal bond.

Although all working within the same Order and tradition, different Commanderies will have different personalities and approaches. Anyone unsuited to one Commandery is welcome to apply to another. However, initiation into one Commandery does not necessitate automatic acceptance into any other Commandery.

Initiates, probationers and associate members are all addressed as Companions.

Inquiries should be submitted to the Administrator-General of the Astrum Sophia at astrum.sophia@gmail.com , or to the Master of a Commandery.

Before becoming a member and receiving the Rite of Induction, every applicant shall pass through a probationary period: admission to this probationary period, as well as its duration and occupation, shall be at the discretion of the Master of the Commandery. The Order has three operative foundation grades:

Progress in Astrum Sophia shall always adhere strictly to the sequence of Halls and Initiations, and no brevet grades shall be conferred or recognized by the Order.

The First and Second Halls constitute the Outer Order, or Lesser Mysteries. The name Ordo Astrum Sophiae is generally applied to the entire Order, but properly refers only to the Outer Order.

The Third Hall (which also incorporates the higher mystical degrees of the Order) constitutes the Inner Order, or Greater Mysteries. The name of the Inner Order is Stella Gloriosa.

Unlike the first two grades, that of Adeptus Minor is not fully achieved by initiation, but by subsequent personal endeavor and reception of the Rite of Ratification, whereby the initiate becomes Adeptus Plenus (Full Adeptus Minor). However, the term Adeptus Minor is often used to denote simply the initiatory status of the Third Hall. The Order retains an operative rite for conferring the Adeptus Plenus: the Rite of Ratification within the Astrum Sophia/Stella Gloriosa. Additionally, Astrum Sophia retains two Mystical degrees beyond that of Adeptus Plenus.

Advancements to Third Hall must be approved by the College of Thrones.

ABOUT THE GRAND MASTER: WILLIAM STOLTZ

William’s first contact with Melita Denning and Osborne Phillips was in 1980 in Minneapolis/St. Paul, Minnesota. In 1984 he was made an associate member (Sodalis) of the Aurum Solis College of Thrones and was ordained as the Magus of the House of the Winged Serpent by Melita Denning. In 1985 he was elected to full Sodalis in the College of Thrones and made Administrator-General of the Aurum Solis. In 1999, after a hiatus during which the Aurum Solis was inactive, he resumed his Third Hall work and was Ratified as Adeptus Plenus in 2000. He received a Charter of Succession from the Grand Master of the Aurum Solis, empowering him to establish and govern an autonomous and contacted Order of the Ogdoadic Mystery Tradition and granting him the authority to administer all degrees, appoint all officers and to establish or revise all rites.

In September 2002, after receiving the Charter of Succession, he helped to establish the Ordo Astrum Sophiae, a contacted Magical Order deriving its spiritual succession and lineage from the Aurum Solis. William continues to maintain a deep appreciation and abiding gratitude for Melita and Osborne’s friendship, uncounted hours of magical work and for the many profound and powerful spiritual gifts he has received from them over the years. The Astrum Sophia is a dynamic and living manifestation of the Ogdoadic current and the Aurum Solis lineage, with members across the English-speaking world, particularly North America and England.

William is also a Master Mason and holds a Master’s Degree in Psychology and Human Development from St. Mary’s University in Minnesota. In addition to his study and service to the Western Mystery Tradition he has a background in Eastern systems which include Taoist alchemy, Tantric yoga and initiation into two braches of Tibetan Buddhism. 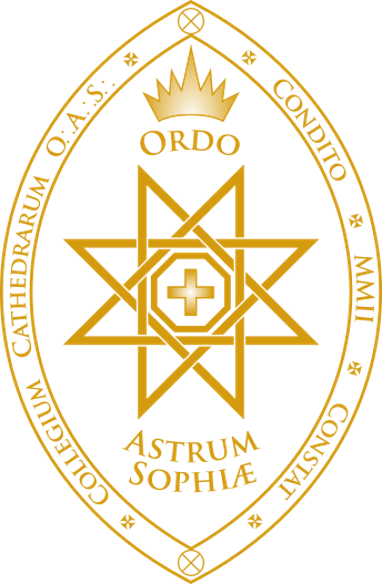